Into The Future with Virtual Reality

VR is an exciting part of the technology world and the market is expected to continue to grow to over 20 Billion dollars by 2025. As our technologies continue to evolve, new opportunities become available. VR has been around for a few years now but is more accessible than ever before. It has been more widely adopted in Asia than it has here in the UK, but the trend is seeing a greater uptake of the technology here.

As the world changed around us and a new normal unfolded, we saw a massive shift in our interaction with technology. Although the technology was not new, how we utilised it changed our experiences forever. Video conferencing became integrated into our daily lives and digital immersion accelerated.  Circumstances fast-tracked the popularity of new ways of communicating and sharing our desire for story telling.  We believe that this is the beginning of a whole new world and virtual reality is here to stay. Virtual reality is, by its very nature, an immersive one, but also very personal. It solves many problems and opens up many new opportunities. It offers a path to more empathy, understanding and awe. Something the world needs right now!

The immersive experience can be either monoscopic (2D) or steroscopic (3D). VR cameras also come in 360° or 180° flavours. Currently we offer VR180 format, which gives the viewer a sterescopic 180° panorama to look around in and focusses their attention on what’s happening in front of them. This is especially useful for interviews, people-centric productions and the performing arts.

VR film offers the viewer a passive experience, like going to the movies, a gig or the theatre, and 180° is the perfect stage for such experiences. 360° is more useful for nature and landscape productions where the viewer can stand and look around at the wonders on offer in the virtual world, from Mount Everest to the Mariana Trench.

Our Neon8 Blog on this site will be focused on our virtual reality adventure and we’ll be offering some of the insights we unravel on the way. The ways in which we consume content are changing and there’s no doubt the vr experience offers viewers an exciting way to explore, learn and be entertained. 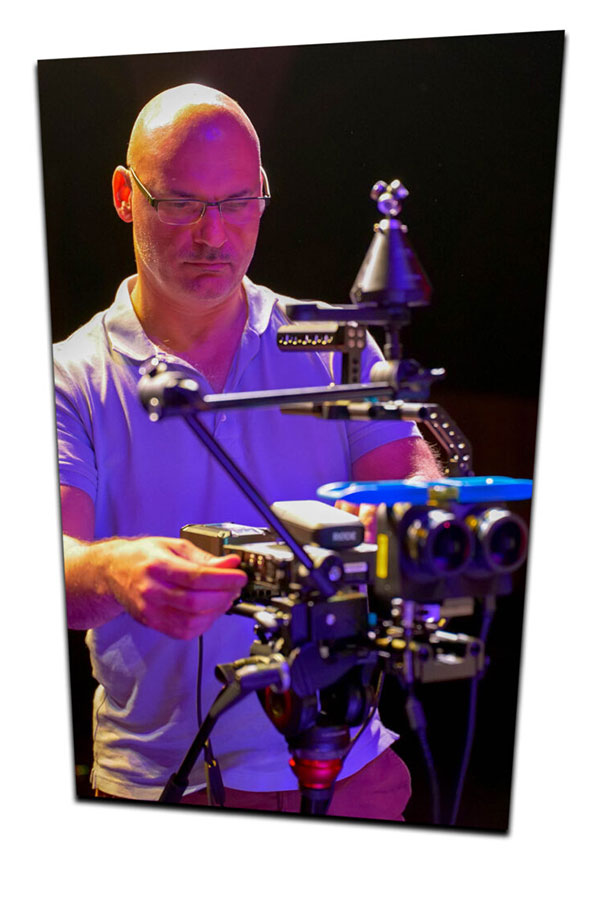 VR can be consumed on a dedicated headset like the Oculus Rift, Quest (and the recently announced Quest 2) and HTC Vive in addition to viewing on YouTube with a VR viewer for your mobile phone. We are able to produce VR video content for all these platforms. Whilst playing a virtual reality game in more active experiences is a popular driver of the current trends, we firmly believe films will be main events in the ever-growing community. After all, we still consume films and theatre experiences as passive audience members. Being the receiver of entertainment, rather than the protagonist as the gaming experience offers, is still a strong driver of the industry and will always be so. We sometimes love to hear a story, rather than write it ourselves.

As headset technology evolves, so too will the world of extended reality (XR), which encompasses VR, AR (augmented reality) and MR (mixed reality).

Neon8 have a full VR180 rig for video and ambisonic, binaural and spatial audio (headtracking panning in virtual space), as well as all the post-production tools and expertise to produce content for all platforms. We can also hire VR360 cameras and use our regular audio and post-production tools to create content.

Why VR? Is it right for us?

Although not yet as accessible as regular video content, this is changing and VR offers the viewers unique immersive experiences which help foster understanding, empathy and of course, great entertainment.

Can anyone see our VR videos?

Yes! Both Facebook and YouTube support VR180 & VR360 content. You can view the videos without a headset in a regular video window that you pan around using your mobile device (or keys /mouse on a computer). However, to unlock the full experience you need a headset. This could be one that fits your phone or a dedicated headset, such as the Oculus Quest 2, HTC Vive or Valve Index through the SteamVR platform.

We’d love to chat with you to see how our VR films can help tell your story. If you’re based in Edinburgh we can meet up for a coffee chat and if you’re further afield, we can chat online. We look forward to hearing from you.